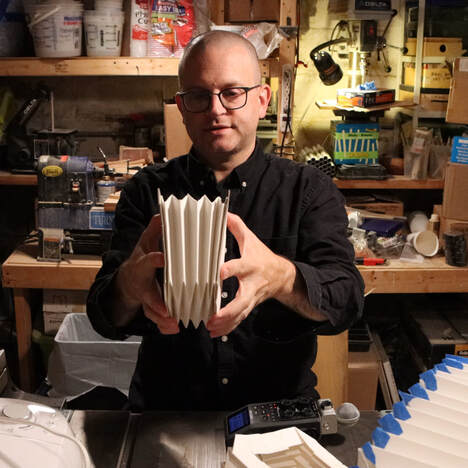 You are drawn to sculpture. Why not painting or drawing?
I’m not drawn to sculpture at the exclusion of anything else. I’m interested in a wide range of things. I think I’m often trying to throw many elements together to make some synthesized art form. Anything I’m doing might end up as an assemblage of disparate parts. I love all the stuff. I think I have had to figure out what I am good at and what I’m not. I tend to think of artmaking as a laboratory where you get into something. You start exploring an idea. Sometimes it goes somewhere, and sometimes it doesn’t. Usually, the things that go somewhere for me tend to have their roots in something interactive, mechanical, or involve a multisensory experience. But there has to be an emotional or psychological hook.
​
Did you one day realize that you had some talent?
Art has been the most effective means of communicating since I was a child. I don’t know that there was talent, so much as social isolation from peers and spending a lot of time making drawings, sculptures, music, or software. I would share something I would create, and I learned that I could be entertaining to people in this way.
Later, when I was in high school, some friends and I cut classes and went to the National Gallery. I realized what an artist was and that there was a spiritual aspect to art that had nothing to do with commercialism and entertainment. When I left home at 18, I realized that that’s what I wanted to get into.

How do you begin one of your sculptures? What’s the starting point?
Making a sculpture or any piece comes from a range of origins. I’m usually cooking up a range of ideas. I’m often ruminating about something (childhood, society, politics, environment, technology, history, and so on). I make numerous drawings attempting to express a philosophical idea or an abstract model of “reality” or whatever. After a few years of sketches, shallow concepts laying around in notes, clay models, crude paintings, or many bad drawings, I’ll revisit some of these and evaluate them. Then I’ll come up with what I think is a better variation of some of those artifacts. Then I might make a move on them. Or, If they’re bad enough, I’ll abandon them altogether.
At some point, I noticed that when I became too caught up in communicating an idea, I started focusing on making small parts or things that seemed trivial or meaningless. Then that enabled me to create sculptural pieces based on “impressions” and helped me move away from being too pedantic. I began to hate the work I was making less immediately because the work focused more on emotion, space, or the magic of creativity in some way.

Your inspiration, where exactly is that coming from?
I think I realize that my work is about the struggle to understand reality. Various disciplines such as philosophy, physics, psychology, and others are areas that I like to learn about. But every time there’s a new development, human discoveries reveal humanity’s foolhardy ignorance and reliance on perception. A connecting point for me has been my personal life. I struggled a lot with social isolation resulting from some childhood health issues. As a kid, I thought the world I was perceiving was some kind of invention. That thought process isn’t terribly different from the thought bubbles we tend to exist in, being obsessed with social media or celebrity gossip. So, I often focus on three psychological concepts: derealization, depersonalization, and self-regulation. They manifest in various ways (making interactive art, paintings only visible with a UV light, or focusing on meditative color harmonies, incorporating video, music, and animation). Attempting to find a way to awaken and connect to the psyche is why I make art that uses a range of media (sometimes with a broader palette, sometimes a more narrow one).

Tom Estlack grew up in York, Pennsylvania. He is known for his interactive, kinetic, and musical sculptures. He studied sculpture and painting at the Columbus College of Art and Design before completing his master's at the Indiana University of Pennsylvania and the Academy of Fine Arts in Ljubljana, Slovenija. Tom exhibits sculpture and assemblage works in the United States. In contrast, his animated video works receive more international attention, showing his "Synesthesia" series of music videos in Italy, Russia, Romania, Finland, Lithuania, and El Salvador. He teaches workshops on animation, sculpture, and drawing and exhibits art in solo and group exhibitions.
​Find more information at estlack.com.